There is never the “right time to say goodbye”. There is, however, always the chance that when someone goes, they leave behind a memory that will last.

We said goodbye to Markus Hausling, who lost his battle with ALS this week. At a time when families are planning to enjoy being together his family, the paratriathlon family and the all-embracing family that is triathlon will this Christmas be that little bit more empty.

Eric Angstadt Torres, ITU Manager, Paratriathlon and Multisport, “All I can say was that he was one of the athletes that was always holding a nice smile and enjoying every race no matter his result. He actually appreciated each and every moment in life in a way that so few people do. It was his attitude that was so positive and that positive energy is what really made it special to be around him. That outlook on life was hit hard in 2015 when , after Chicago he felt it unlikely he would make Rio, but what really disrupted his plans in life was the moment they told him he had ALS. We are so lucky to have enjoyed his company as an athlete and as a person. He will surely be missed.” 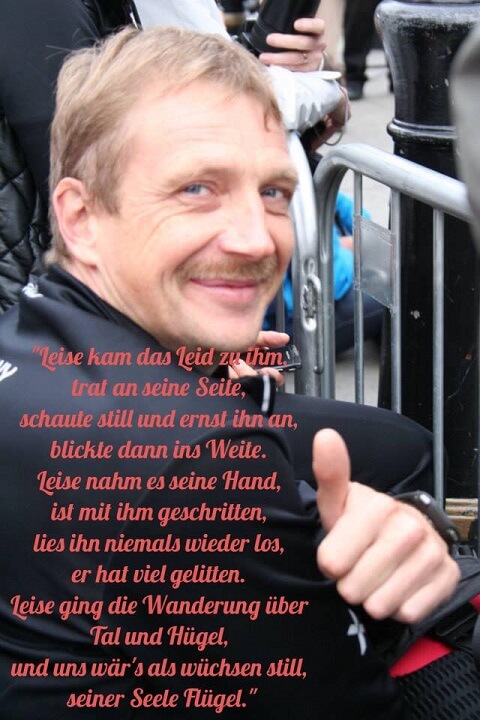 Markus was working as a prison guard in a high-security prison near Kassel, Germany. His medical problem started in 2004. Perhaps it is best that he explains, “My paralysis began back in 2004. During a football match – I was goal-keeper, all of a sudden I could not feel my legs. I fell over but at the time didn’t really think too much about it. I simply thought it was a due to a lack of sleep as I really suffered on the night shifts that we have to work. But it was not just the once. It happened again about a month later and then it seemed to get worse and worse. The medical experts diagnosed me as suffering from ALS (Amyotrophic lateral sclerosis, sometimes called Lou Gehrig’s disease). We never did establish how the infection was caused but it might have come from an infected needle that was used to inoculate me.”

As a young man with a family he faced the stark reality that everything looked as bad as it could get. There was no way out and, confined to a wheelchair and in the darkest moment possible, “It was at that moment that it all became too much: I was going to lose my job, face financial ruin and see my marriage fall apart. It was in November 2005. I just edged the wheelchair to the balcony outside my hospital room and pulled myself up to the railings. I just let go but the medical teams had spotted my depression and there was a safety net below. That net caught me and it was my family that saved me and gave me the support needed to pull back from that dark edge.”

The job looked after Markus too. It is gratifying that an employer has the decency to support its employees. They did not push him off into early medical retirement but instead made the necessary adjustments to enable Markus to return to work and, initially,  to focus on the administrative side of the prison operation before gradually adapted to working once again with the prisoners.

One thing that Markus will always be remembered for is his smile. A smile that shines through with a great sense of humour. 16 years he has worked as a prison guard, 11 of them in a wheelchair. A man of many experiences and a man who has turned the challenges he faced into positives. He recounted an incident in the prison, “I was in one of the old wings of the prison. Normally there would be no prisoners there but all of a sudden and out of nowhere, a prisoner appeared and blocked me. He said, ‘What would you do it I took you hostage?’” In such moments there is a natural ‘fight or flight’ response that is hard-wired into humans. For Markus this reaction had to be adapted. “I told him, ‘I don’t think I’d be much good as a hostage. Let’s look at the problems. Firstly I would be not good at protecting your chest from the snipers in the control towers. Secondly, you have to push me and that means one hand on the chair and one on whatever you have as a weapon. We’d go round in circles. Lastly, if I fall out of the chair you would have to pick me up and carry me.’ He went pretty quiet after that.” 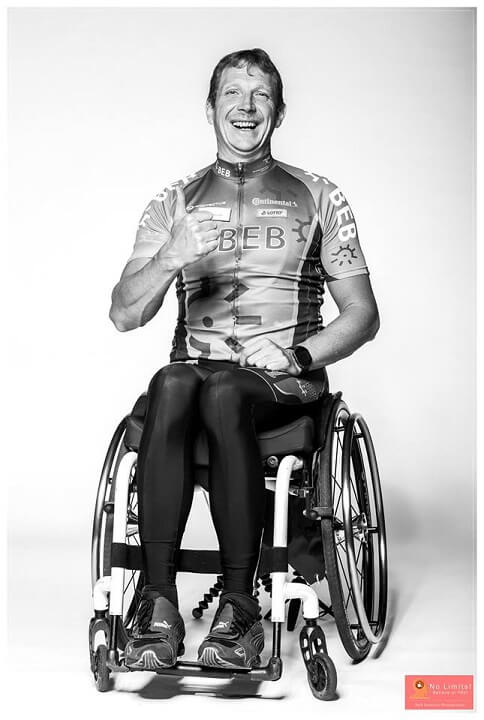 His aim had been to go to Rio but this aggressive disease had other plans. Rio was off the calendar but rather than walk away from it all Markus devoted what time he had to the charity, “Kennst Du ALS” and, in a great gesture of friendship, arranged for his hand bike to be passed to Brazilian athlete Fernando Aranha, who raced in Rotterdam earlier this year and who, on Markus’ bike, had a top ten finish in Rio. In some way, Markus did make it to Rio – because his name was on the bike that crossed the finish line.

Markus spent a year with a reporter from NDR (Norddeutscher Rundfunk). Watch, “Das Schicksal des Paratriathleten Markus Häusling”, and get to know him. The video, in German, is very difficult to watch. There were tears here as I saw here this morning but also a great feeling, not sure what it was, as I watched a truly brave man.