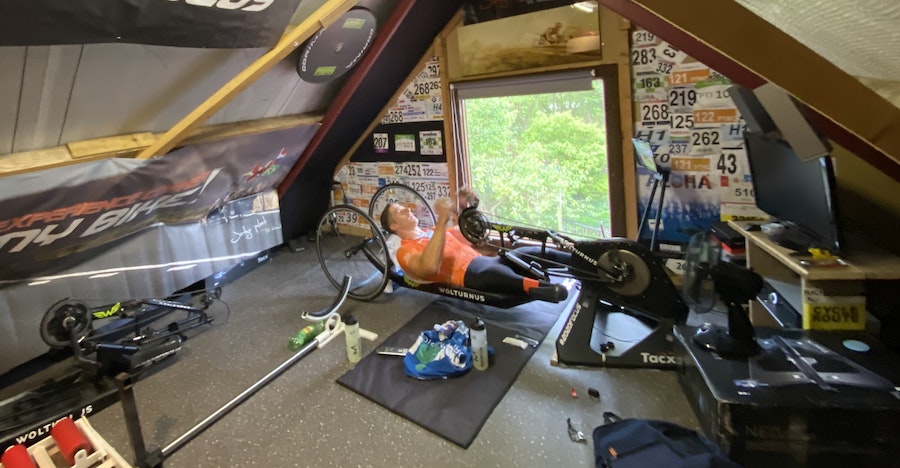 Dialling in from just outside Amsterdam, where he has enough space to train outdoors as current Dutch regulations allow, Jetze Plat is in philosophical mood. The Rio 2016 Paralympic Champion has the air of a man for whom the limitations of lockdown are also presenting an opportunity to train more, develop his ever-impressive strength yet further and switch focus from the prospect of a fifth straight World title to matters closer to home. For now.

It just so happens that the Paratriathlon World Championships were due to take place in Milan this weekend, another event that would have been gleefully written on to the race planner at the start of a year that promised so much.

For Plat, 2020 had all started so well. Off the back of a bike camp at the end of 2019 with the Dutch Cycling Federation, he joined the national Olympic team in Namibia for a month of training. Being the only Paralympian chosen to attend was recognition of both his incredible athletic ability and his powerful training regimen.

“These were new experiences for me but it was perfect to train alongside top athletes and have them pushing on the bike and swim. Richard Murray and Rachel Klamer were both there, too, which was nice and good for my level. And hopefully for them too!”

It was there that they heard news of the postponement of the Abu Dhabi World Paratriathlon Series season opener, so rather than waiting around in Holland, Plat decided to head to Girona early for a planned camp in Spain.

“We weren’t aware of what was coming so we still headed to the camp. We had this perfect long ride out there, got back and turned on the radio and heard Spain was going into lockdown, and had to drive straight home. It was a crazy time. Losing Abu Dhabi was terrible for my motivation after we had prepared so well, but sport was suddenly not the priority, and rightly so.”

Back home, Plat is never far from his man-cave and, specifically, the Zwift trainer, and knows he is extremely fortunate to also have some access to a private pool. As for longer rides outdoors, there is no question of joining up with anyone else to help the motivation. At least not in person.

“When I train outside I make sure to train alone. It’s a world problem so we have to deal with it and be smart. The uncertainty makes training different, but I’m still motivated and I love the sport so I still keep going.”

Plat took up hand-cycling at the age of 12 and did his first competitive triathlons in 2009. After making his Paralympic debut with cycling at London 2012, he made the transition to swim-bike-run more permanent and now has the prospect of defending the Olympic paratriathlon title he won in Rio four years ago. For him, the biggest impact of the IOC and IPC decision to put the Games back a year is a delay to some planned down time.

“Nobody knows what’s coming so the only thing we can be is transparent with each other and share information when we have it. It was such a huge event the decision was always going to be difficult, but I think this was the best solution for now. Unfortunately there are always going to be winners and losers before a race.”

Staying race-fit clearly hasn’t been a problem for Plat.

“I’d be ready to race tomorrow if need be! Training isn’t as hard or as long but sometimes we test ourselves and do some race simulating. It was a long winter without racing so I need that, I need to test if I’ve made the progress I wanted.”

Keeping up with the world on Zwift has been a good challenge, and being able to broaden his focus beyond his own World Championship and Olympic preparations has, it seems, also put him in a positive frame of mind.

“This is not what we were expecting for right now, just before the World Championships. Normally it’s all about yourself at this stage and before Tokyo, but now it is about helping each other and time at home. I think I’ve been able to turn that to a positive. I’ve been doing a lot of at-home videos and have a regular little time-trial competition with my brother to test each other. He’s fast on the bike, so we have carved out some positivity.”

For now, then, Plat has had to reign in his horizons somewhat, but the spring will clearly only stay coiled for so long when the prospect of competition slowly comes back into view. Despite the disappointment of missing out on a first WPS in Abu Dhabi, he is optimistic about the sport’s growing profile both in the Netherlands and around the world.  Being part of the World Series circuit and what would have been a Sarasota World Cup in which the prize purse was the same for the Elites as well as the Paratriathletes are helping the development.

“I hope that there’ll be some new guys coming through to make our lives a bit harder, but the sport needs some time to get more people involved. The level is high of course, and if you’re top 5 you have to be really good, but the overall pool of athletes is much smaller. The difference between being a starter and top-level is so big, with not many steps in between. There are some talented youngsters and I try to teach them and keep their enthusiasm, so hopefully in 2024, there will be more.”