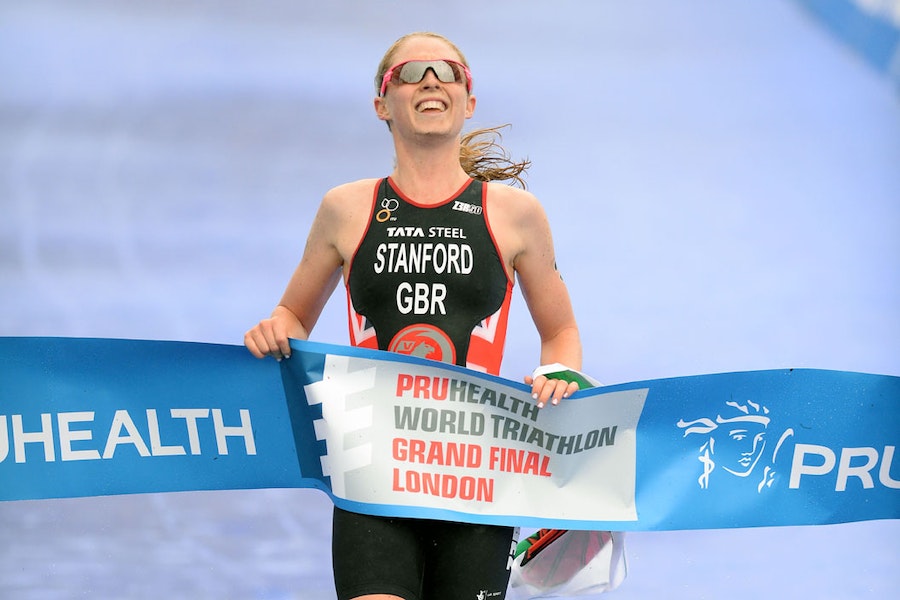 Stanford finished in two hours, one minute and 32 seconds to win her second series race of the season, finishing 25 seconds ahead of Ireland’s Aileen Reid in an impressive second place and a further three seconds ahead of Australia’s Emma Moffatt in third.

“Being the World Champion, It’s crazy, it hasn’t really sunk in yet,” Stanford said. “I’m just trying to take it my stride, but when I get 5 minutes to reflect on it I will probably get quite emotional. I just can’t believe it to be honest, I can’t quite put it into words. All the hard work over the last year, I’ve just managed to hold it together and it’s paid off.”

Rankings leader Gwen Jorgensen (USA) was forced to retire after a crash on the bike and Germany’s Anne Haug had a poor swim that pushed her right out of race day podium contention. Haug eventually finished down in 34th place in 02:06:28, but can console herself that despite an uncharacteristically bad day, she held on to a world championship podium finish with bronze. It was double heartache for Jorgensen, however, whose performance in London paved the way for Jodie Stimpson (GBR) to snatch a place on the overall series podium. Stimpson finished fourth on the day in 02:02:06, which helped her to silver medal in the overall standings.

The day had started well for Jorgensen. With only thirteen points separating the top three women after the seven races before London, Jorgensen knew her slight advantage would be enough to hold off Haug and Stanford if she managed to win in London. And it was Jorgensen who set down the marker during the 1.5km swim in the Serpentine. Continuing on from her strong swim in Stockholm, Jorgensen was within ten seconds of the lead after the first lap and exited the water in 11th place, just 15 seconds behind Moffatt who was first out of the water in 18:43 just ahead of Sarah Groff (USA).

Things got even better for Jorgensen when news filtered through that Stanford had been given a 15-second penalty after not correctly placing her wetsuit in her box after the swim.

“The 15second penalty wasn’t ideal at all,” Stanford said. “Jodie [Stimpson] came up to me on the second lap of the bike and said ‘Non you’ve got a penalty’ which was a disappointment but also great that she told me. So I just had to think of how best to deal with that. It happened to Jonny [Brownlee] last year at The Olympics and it’s not impossible to overcome. So I just knew I had to go out of transition really hard and get that gap early on. Then once I would get out of that penalty box I wouldn’t give them a chance to get back in. It is all really about the psychological thing over everybody and that was really hard work.”

The swim was also significant for Haug. While not uncommon for Haug to exit the water towards the back of the pack, she struggled more than usual in the water. She was two minutes behind the leaders when she got on the bike and her usual comeback ability this time failed to materialise.

It was looking like Jorgensen could begin to think about victory but there was more drama on the bike, as Jorgensen fell in slippery conditions, costing her vital time. Worse was to follow as a bruised Jorgensen soon retired from the race to end her chances of winning her first world championship.

“I prepared to win today’s race and was disappointed to not be able to finish,” Jorgensen said. “The fall happened so quickly that I’m still not sure exactly how it happened, I must have made a small error that in the rain turns into a big mistake. I am absolutely gutted – I came to London to win. Congratulations to all of top finishers from today and for the overall season Series. I’d also like to thank the many people who supported me this year, and all of the U.S. fans back home. I’ll leave London even more motivated, and am very much looking forward to what next year holds.”

Suddenly Stanford was back in pole position as part of a large lead group on the bike, but with a penalty to take, it gave new hope to Jodie Stimpson who had started the day fourth in the rankings. At the start of the race Stimpson had only a slim chance of becoming world champion but after an action-packed first half of the race, Stimpson knew she could win the world championship if she won the race and Stanford finished third or lower.

Rachel Klamer (NED) was first to start the run, leaving transition in 1:28:19 but Stanford soon raced ahead and created a big early lead. The Briton’s tactic was to build a strong enough lead before taking her 15-second penalty in the hope she would resume the race still in front. She did exactly that, Stanford took her penalty just before the final lap and did indeed restart the race in first place ahead of Groff. A determined Stanford clearly wanted to win in style and increased her lead after her penalty before crossing the line to huge cheers from the home crowd.

Behind the frantic battle for race podium places ensued as at times, Stimpson, Moffatt and Groff were in second place. But with a final finishing chute burst, it was Reid who pulled out the killer kick to claim a silver medal, her equal best series result. Moffatt held on for third while Stimpson crossed the line in fourth.