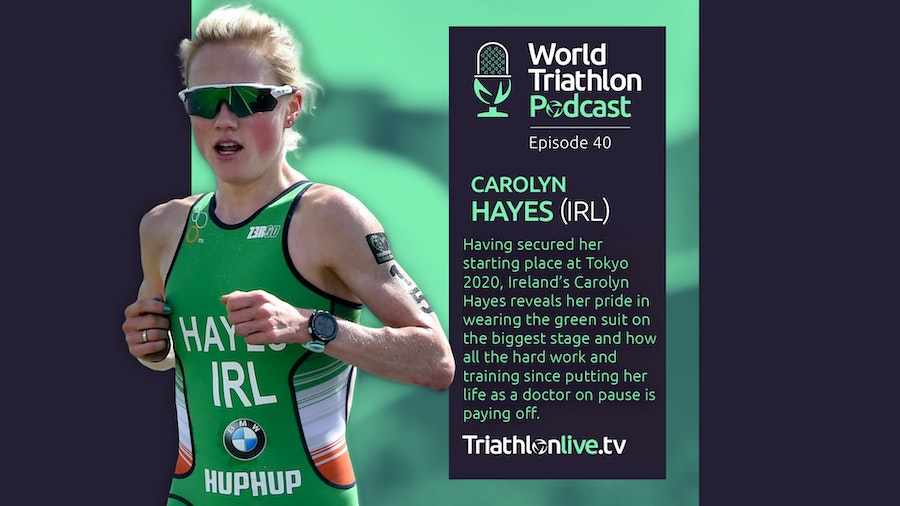 Carolyn Hayes will wear the green of Ireland at Tokyo 2020 after securing Olympic qualification with a fine run of results that included her second World Triathlon Cup silver in May, coming home behind Switzerland’s Nicola Spirig after a terrific kick out of T2 and spirited finale against one of the biggest names in the sport.

On the latest edition of the World Triathlon Podcast, Hayes talks about putting her career as a doctor on hold, the women who inspired her, the coaches who have honed her and the mother who will light a candle for her as she heads to a first Olympic Games. You can listen to the full episode on Apple, Google, Spotify and all major platforms.

—
“I always just wanted to be a doctor, becoming an Olympian was a distant dream. I took up triathlon when I was in my second year of medical school and I thought it’d be a good way to escape the pressures of study and, in hindsight, that probably wasn’t my smartest move,” admits Hayes, who took up all three elements with gusto from the moment she was introduced to the world of swim-bike-run.

“I upped sticks from my home in County Limerick to join the Hup Hup training group where we had 11 year old kids right up to people in their fifties and sixties. I loved that. There was a great camaraderie and I think particularly at the start, when you’re just kind of getting involved in the training, you really depend on the group to motivate you and push you.”

“It’s a high achieving group and I guess I just wanted to find my way and get the most from the people around me. So I kind of sat down and we decided to try and target a couple of events and I really enjoyed the Word Triathlon racing, you know, the intensity. Then I left my job completely, moved to Wicklow and knew that the only way to get better was to dedicate myself to training and to trust my coaches.”

It was a move that quickly paid off. Silver in the 2019 Nur-Sultan World Cup – only her fourth race on the Cup circuit – showed that Hayes was on the right path. It was followed with a top 10 on the tough Karlovy Vary course, fresh from the Tokyo Test Event.

“The Tokyo Test was invaluable, just getting to try some of the heat prep strategies and then see what worked and what didn’t. I love the heat. I absolutely love it. And for an Irish person who’s extremely small and pale and white, I shouldn’t like the heat. I think the sun hits my skin and just reflects off. Then the bike course is super technical, and I’d be quite happy with my bike handling skills, you just have to be aware of your positioning, coming in to judge turns with athletes who are a bit bigger and able to draw more power.”

So who does she think was the most proud upon receiving the news that Carolyn had qualified for her first Olympic Games?

“My coach is a hard man to read, but my mother was obviously incredibly proud. Your family, they go on the journey with you, they really do. You know, initially you’re training for yourself and racing for yourself, but there comes a point where actually you’re not just doing it for you anymore, you do it for everyone who supported you and helped you. And I think that kind of motivates me for the hard days.”

You can watch back Carolyn Hayes’ silver-medal display at the World Triathlon Cup Lisbon on TriathlonLive.tv and listen to the full podcast below.