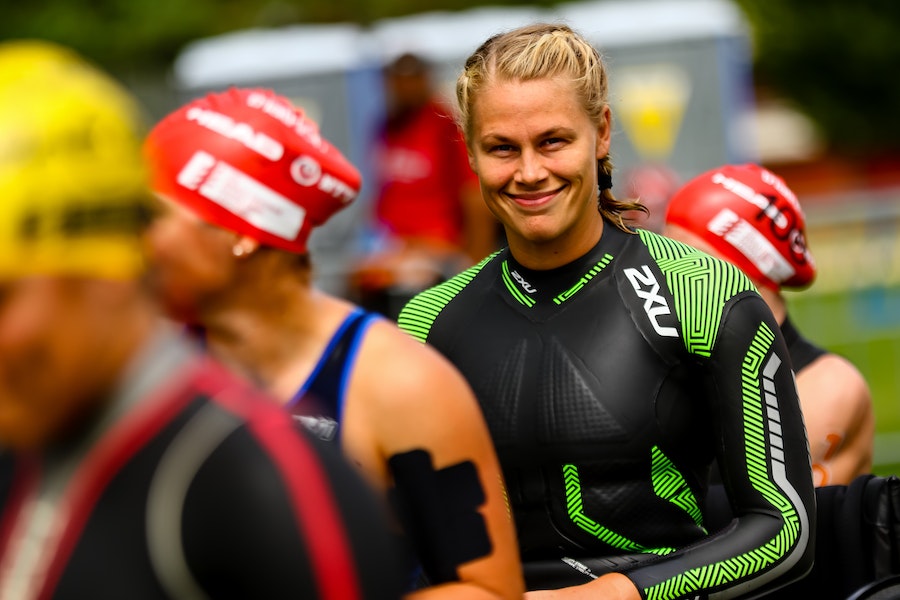 Christiane Reppe burst onto the paratriathlon scene at the end of 2018 with gold at the Madeira World Cup Funchal, making the transition from paracycling look effortless. A Rio 2016 Olympic gold medallist on the road handbike and four-time World Champion, Reppe’s thirst for the next challenge (at Athens 2004 the German won two bronze medals in the pool) brought her to the world of paratriathlon.

Since losing her leg to cancer at the age of just five, the 32-year-old has barely looked back. Now competing in the PTWC category, 2019 has proven to be quite a year. Being crowned European Champion in Valencia in September came just a month after bronze at the World Championships in Lausanne, only her fifth ITU race. No wonder Reppe’s sights are now firmly set on Tokyo 2020 and the possibility of landing a Paralympic medal in a third different sport.

—
What was the high point of your season this year?
There have been a couple of great moments this year, but the absolute high point for me was the moment I realised that I finally had one foot in the qualification criteria for the Tokyo 2020 Paralympic Games after finishing third at the World Championships and first at the Europeans.

And what was the low point?
I remember the time just before the start lists for the World Championships in Lausanne came out… It must have been 35 days before the race and I didn’t believe that I would make it. I’d had some good results but still didn’t have enough points on the World Rankings. The only chance I had was to get an invitation from the ITU, but the fact that I didn’t make the list for the Tokyo Test Event didn’t give me much confidence. I can laugh about it now, but at that time I was thinking about sending a personal letter to ITU to explain my case and to show that I deserved to race against the best women. Fortunately, I didn’t, and the episode still had a happy ending!

What were your specific pre-season targets and did you hit some or all of them?
This being my first triathlon season I haven’t had any pre-season targets. On the contrary, the decision was made very quickly to change sport. Everything happened very fast and I haven’t had much time to think about everything or even set targets. I made the decision and just started the journey without looking left or right.

Is there an element of your racing you will work on in the off season and introduce at the start of 2020?
Just after finishing the last season i’ve signed a contract with a new equipment sponsor and will get a new handbike as well as a new racing chair, so i’m looking forward to improving my racing.

If you could change one moment from the 2019 season what would it be and why?
I would change absolutely nothing! I do make mistakes but I don’t regret any of them because if I haven’t had made them, I wouldn’t have learned how to make things right! Sounds like a typical quote but I really believe it.

What personal goals are you setting yourself for 2020?
If everything goes right during my training season, if I stay healthy and avoid crashing in races, then I could possibly be racing for a Paralympic medal at Tokyo 2020. I already participated in four Paralympic Games in two different sports and to win another medal in Paratriathlon would make me indescribably happy!

What has been the song you have played most on your travels this season?
The Struts - Body Talks.

Did you have a go-to TV series or film when you’re on the road?
I’m a big fan of crime series, so sometimes I pass the time with Netflix and Amazon, but I couldn’t live without my Kindle and getting my head into books.

What are the best and the most challenging things about so much travelling and racing around the world?
Is it challenging? I think the most difficult thing from time to time is the fact that we are mostly alone and far away from family and friends, but it’s a decision you have to make. Some people like it and for others it’s horrible to live that life. I love it, I have friends all around the world and will enjoy it as long as I can. Everything has its time but, no matter how hard a training day was, in my opinion we live a privileged life. We are able to do what we love.

Which athlete has impressed you most this year?
Kristian Blummenfelt winning the ITU World Grand Final and Jan Frodeno taking the win at the Ironman World Championships in Kona with a marvellous time.

Where was your favourite race venue in 2019?
There have been a couple of good ones but if I had to choose one I’d go for the Paratriathlon World Cup in Funchal this year because the organisers changed the course and made the run much more challenging. Besides that, the island of Madeira is one of the most beautiful places to host a race.

What was the biggest thing to happen to you in 2019 outside of triathlon?
Well, i’m pretty happy that I finally graduated my Bachelor degree just one week before the World Championships in Lausanne. Now I can finally focus just on sport. Besides that, i’m still blessed with the results of the 3rd place at the Worlds and 1st place at the European Championships this year!