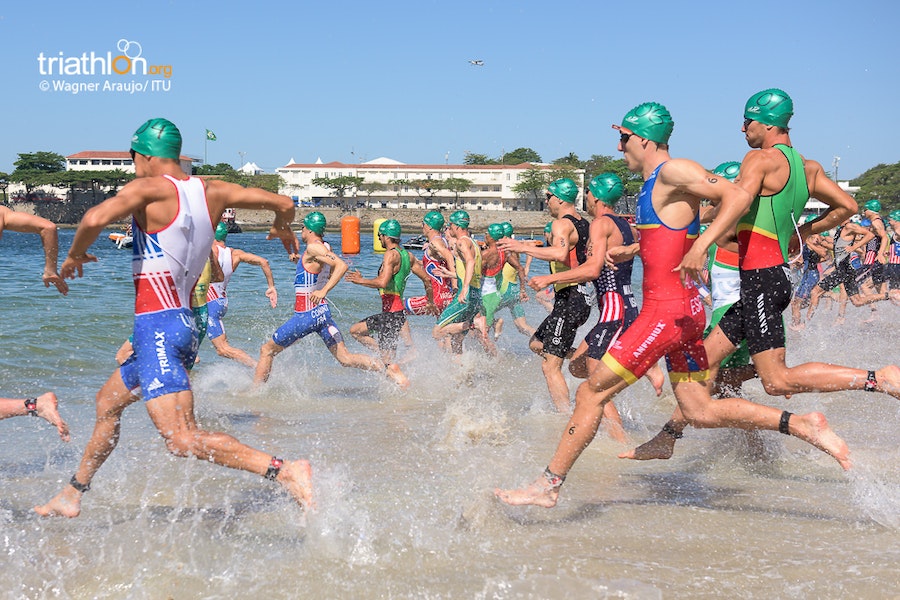 As Jonathan Brownlee noted in an interview with his local paper last month, the Rio course is suited to a strong all-around triathlete. A beach swim start at Copacabana, followed by the hilly and technical bike course, and a fast, flat run course leads itself to triathletes skilled in all three legs. Here is how some of the scenarios could play out by discipline. Swim:
Richard Varga (SVK), who trains with the Brownlee brothers, is the fastest man in the water on the World Triathlon Series circuit. His 16:56 at the London 2012 Olympic Games was the fastest ever recorded at the Games, and he’s the only man to swim sub 17minutes in an Olympic race. The beach start and surf at Copacabana means the swim isn’t likely to hit a split quite that again, but it wouldn’t be at all a surprise to see Varga leading the Brownlees out of the water in Rio.

Alongside that trio expect to see South Africa’s Henri Schoeman (who had the fastest time in the test event swim last year with 17:47), the French team of Dorian Coninx, Pierre Le Corre and Vincent Luis, Australia’s Aaron Royle, Russia’s Polyanskiy brothers and Italy’s Alessandro Fabian to be out front in the water at Copacabana, along with the Brownlee brothers. Also watch closely to see where Richard Murray (RSA), Mario Mola (ESP) and Fernando Alarza exit the water. On foot they are the fastest men on the circuit currently, but they will need to be within touch of the leaders at T2 to have a real impact on the race. And keep in mind that like in the women’s race, the swim hasn’t always been key to winning a medal in an Olympic race. While clearly it was in London, as Gomez and the Brownlees established a hard to beat lead after leading in the swim, Jan Frodeno, Hamish Carter and Simon Whitfield all made up ground after the first leg to run their way to gold.

Bike:
The Rio bike course is not for the faint hearted, with two significant hills and plenty of technical turns, and it is set to be a fascinating hour in the men’s race. Based on the likely leaders in the swim there is every possibility that the strong cyclists in it, the Brownlees, Schoeman, Royle, Fabian and the French team, could make a race-defining break. It’s key to ensuring that Mola and Murray cannot contend. In Leeds earlier this year it was the Brownlees and Royle who did just that, and the trio made it stick well enough to fill the podium places. Last year it was Alistair Brownlee, Royle and Vincent Luis (FRA) who posted the fastest splits on the Rio bike leg.

But the other cyclists through this field will be keen to pull back the leaders, as often happens on the WTS circuit, if Mola, Alarza and Murray aren’t up with the top group from T1 expect to see them taking turns on the chase pack trying to cut the deficit. Murray specifically is well skilled on the bike. Others likely to be next to them include Barbados’ Jason Wilson, who is making his Olympic debut and will be the first athlete from his NOC to compete in triathlon. He’s one of the strongest cyclists on the circuit, unsurprising considering he has also represented his national team in cycling. Throw in others like Bryan Keane (IRL), Jelle Geens (BEL), Andreas Schilling (DEN), Kristian Blummenfelt (NOR), Luciano Taccone (ARG) and Andrea Salvisberg (SUI), who are all capable of holding their own in the lead group or pushing the pace on the front of chase packs, and the bike will be intriguing.

Also keep an eye on Australia’s Ryan Bailie, who last year completed a fairly amazing somersault over the barrier during the bike, and then got back on and finished the event. Run:
On pure speed Mario Mola has been the fastest man on the World Triathlon Series circuit for the past 18 months. However, his training partner Richard Murray isn’t far behind him and the South African threw down the fastest run leg in last year’s test event. At 30 minutes and 30 seconds, it was 26 seconds faster than the next fastest athlete on the day, and 35 seconds faster than Mola. It meant that while Murray left T2 a minute behind the lead pack, he ran himself into third place - overtaking Alistair Brownlee to do so. Murray has had an interrupted 2016, after a broken collarbone on the Gold Coast, but has since come back and won a world duathlon title.

Alistair Brownlee’s time in Rio last year was slow by his comparisons, 33:02. But shortly after he had ankle surgery to fix a problem that had affected him since 2013, and he and Jonathan have since returned 10km times near their best. Keeping in mind that each triathlon run course is slightly different and hard to compare versus a track, in London Alistair split 29:07seconds, his most recent WTS wins have been 31:10 (in Leeds, which also included plenty of celebrating down the home straight) and 30:16 in Stockholm. Jonathan finished second in both those events. The brothers are chasing history in Rio, with Alistair aiming to be the first triathlete to defend a triathlon Gold medal. So far only one athlete has medalled in consecutive Olympic Games - Bevan Docherty in Athens and then Beijing. Usually the previous year’s test event has been a good indicator of the final Olympic race, although usually not in the same order, which also puts Vincent Luis (FRA) on the radar. Having previously collected most of his WTS medals in sprint races, Luis was in the lead from start to more than halfway through the run, with only Javier Gomez finishing ahead of him. His French teammates Pierre Le Corre and Dorian Coninx have also recently shown run form on the circuit.

Others with fast feet to watch in the final leg include Mexico’s Crisanto Grajales, Portugal’s Joao Silva and Spain’s Fernando Alarza. Alarza in particular has sprinted his way onto plenty of WTS podiums recently. And while Kristian Blummenfelt (NOR) is the first athlete from Norway to race in triathlon at the Games, he has hit form at the right time. Blummenfelt recorded his first WTS podium in Yokohama with a sub-30 10km time and won the sprint event in Montreal just last weekend with a 15:04 run split.