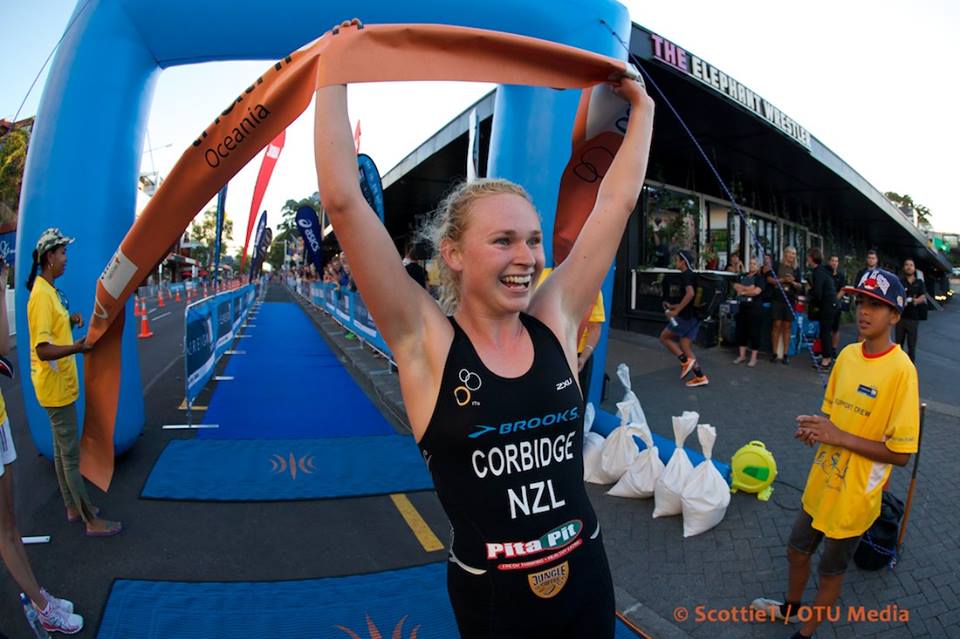 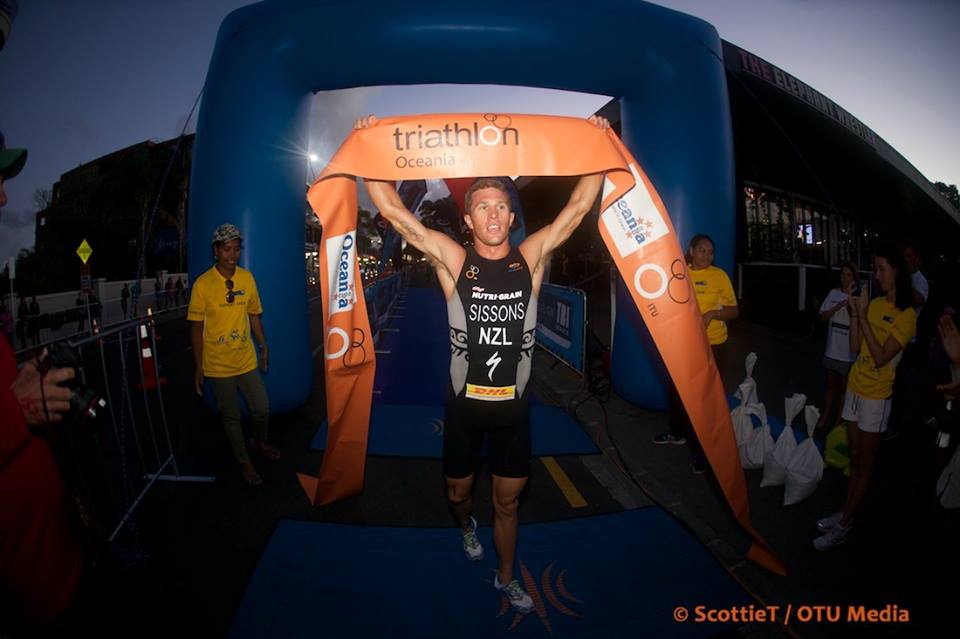 It was a Kiwi double at the Oceania Continental Cup Triathlon at the Sovereign Tri Series Takapuna event on Friday night, with Ryan Sissons (Auckland) and Sophie Corbidge (Auckland) taking out the elite men and women’s titles, Corbidge adding victory to her win in the Oceania Sprint Championships in Kinloch a fortnight ago.

Racing was spectacular on the tight and technical Takapuna CBD course, playing out in front of big crowds around both the Hurstmere Road entertainment area, as well as along the beach with spectators filling the new restaurants and bars on The Strand to catch the action.

Once into the final a lead group emerged out of the water and on to the bike and it had a strong international flavor to it with Canada (Alex Lepage), Greece (James Chronis), Australia (Luke Willian) and New Zealand strongly represented with Ryan Sissons, Cameron Todd and Tayler Reid.

The pace was on throughout as the lead group looked to maintain a 20 second advantage over the chasers, led by Sam Osborne as the big Kiwi used his power to try and close the gap or at the very least, limit their losses on the bike.

Once on to the run though Sissons made no race of it, quickly moving clear of the pack, leaving Willian in his wake while Michael Lori (Canada) ran strongly for third, just ahead of a similarly fast finishing Osborne who ran through many of the leaders into fourth.

Sissons was delighted with his outing. “The first race I didn’t have a great swim and had to work hard the first lap of the bike but coming to the final I kind of got going, having warmed and was able to get the legs moving. I haven’t backed off some heavy training this week but the final was great, the swim was where it needed to be and I didn’t do too much work on the bike, that was my approach as I wanted to work hard on the run. I came off the bike and pushed from the start and tried to go as fast as I could the whole way, I got a decent gap and pushed to the finish.

“This is a great event, the Sovereign Tri Series is always a highlight and racing here in Takapuna is special, I have won this three times now. Racing late at night is something different, there were people all the way around and running home in the near dark in front of everyone in the bars and restaurants enjoying a night out makes it different and very enjoyable.”

Willian ran home for second place ahead of Lori (Canada), Osborne (NZ) and Lepage (Canada) in a truly international leaderboard.

Corbidge was equally impressive in winning her second event in a fortnight, both earning vital ITU ranking points for the season ahead.  The 24 year old emerged from the water on the heels of leaders Rebecca Clarke (NZ), Lisa Norden (Sweden) and Renee Tomlin (USA). The American dropped off the pace on the bike though, leaving three in the lead group to push away from the field, establishing a handy lead on the chasers.

Once on to the run though Corbidge made her move, with Clarke the first to fall away and Norden unable to answer the surge of the Kiwi as she pulled away to win in front of family and friends.

“The night race meant different preparation so it was a different day, with an early morning jog and spin to get things going. I knew it was going to be a red line type of race so I hammered the swim and came out in a good position with some of the top girls, I had a really fast transition and as soon as I got out on the bike I worked really hard to try and hammer the pace and we managed to break away and worked well as a group of three. That gave us a lead into transition and to be honest I felt rubbish after what was a hard bike! Halfway through the first lap Lisa was in charge and then I just felt her pace slipping and I went to the front and felt awesome. I was just chasing the win in front of family and friends and a home crowd, it was amazing.”

Norden raced home for second, with Tomlin finishing strongly on the run for third ahead of a delighted Nicole Van Der Kaay (NZ) and Chika Sato (Japan) in fifth place.

The crowds were treated to the sight of over 60 boys and girls slugging it out in the Youth race, held in between the elite heats and finals. Many of the triathletes are in Auckland attending the Takapuna Youth Festival and took the chance to race ITU style, with drafting allowed on a tight and fully closed course.