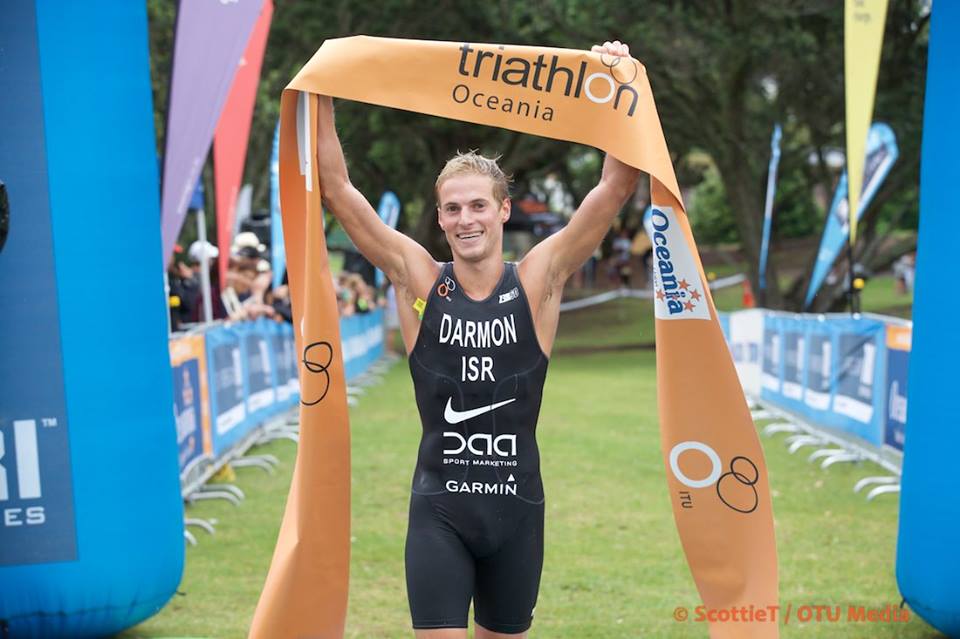 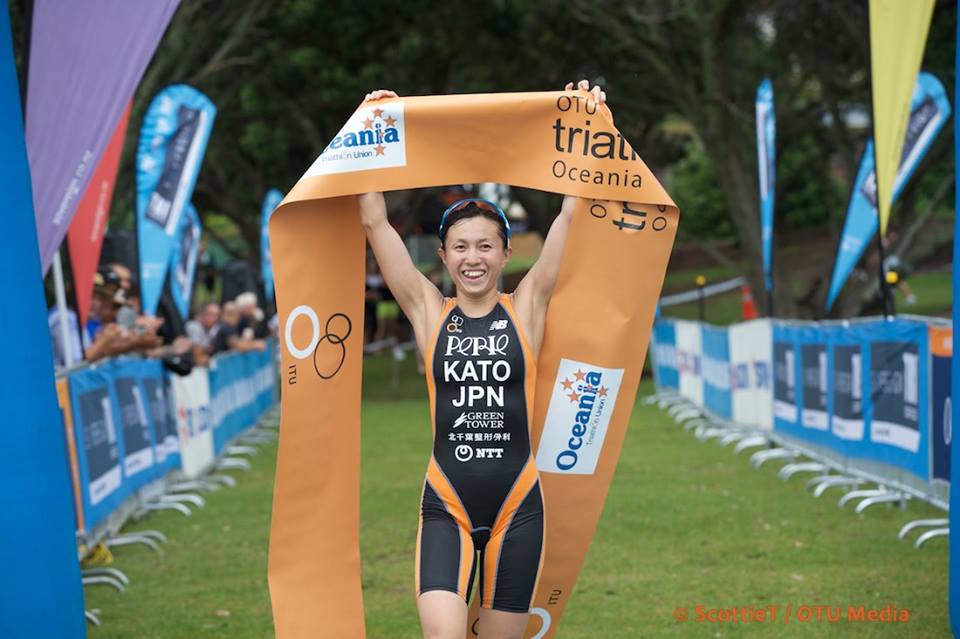 A tight course combined with rain on a hot and humid afternoon in Takapuna, Auckland made for some exciting racing among the elites in the Oceania Continental Cup Sprint races on Sunday 28th February..

Multi-national fields lined up in both the elite men’s and women’s races over the sprint distances and it was international athletes that came up with the gold medals in both, Jurie Kato (JPN) taking out the women’s race and Ron Darmon (ISR) the men’s, both on the back of superb runs. Kato had to battle against a large group of young New Zealanders throughout before easing away on the run leg, showing all of her World Series racing experience in doing so against her much younger opponents.

“I am very happy, very happy with my win,” said a beaming Kato. “Today was a very good race, the ride was very good with the New Zealand athletes racing very fast but I was the best one on the run today, this is good for my season and for my time training here in New Zealand.”

The only one to remotely threaten on the run was Deb Lynch (NZL), the Porirua athlete stayed within touching distance through the opening kilometre on foot before settling for a strong second place finish, ahead of 18 year old Elizabeth Stannard (NZL), the Palmerston North based member of the Tri NZ National Talent Squad impressed in the difficult conditions to stand on the podium.

The men’s race was dominated by the Australians and eventual winner Darmon who has been based in New Zealand for some weeks training and racing. Matt Baker (AUS) was the first to show out on the bike, riding away from early leaders Darmon and Trent Thorpe (NZL) – the young Aucklander led out of the water and rode aggressively through the first half of the bike to excite the home crowd. Baker was then joined by Declan Wilson (AUS) and Darmon to establish a 20 second lead heading into the run and with only 4.3km to negotiate around the Takapuna CBD circuit, the medals were in sight. Darmon proved to have the best running legs on the day – at least of the leaders, as he cruised to an impressive win, with Marcel Walkington (AUS) posting the fastest run split of the day to claim silver with Baker holding on for bronze ahead of Yuichi Hosoda (JPN) and young Aucklander Dan Hoy (NZL) in fifth place.

Darmon has been one of a number of internationals – including the Japanese team, training in New Zealand over the summer and was delighted with his form in Takapuna.

“We didn’t expect it to rain even though it looked that way, it took me three of four laps to get my confidence around the corners but the race fell into my plans when two of the Aussies and I broke away and I just tried to stick on and then had the better legs on the run.

“I have been working hard on my running towards the ITU season, I thought I would have the better legs today and went for it on the second lap on the run and managed to hold on. I like this course, New Zealand is always challenging, if it is not technical it is hilly, today in a way we had both I guess. These were my prep races heading into Mooloolaba World Cup but I will definitely be back for the New Plymouth World Cup and then racing well in ITU events to qualify for the Olympic Games.”

17 year old Hoy proved the best of the Kiwis as he posted the fifth fastest run split on the day to finish in that same position.

“That was good, my first hit out since Worlds last year after suffering from some illness over the summer so it is good to be back on the start line and racing. I came out of the water kind of just behind the front bunch, the swim is lacking a little at the moment as I haven’t been working with my normal squad until my body is ready. At one point we got the margin down to about 8 seconds but we just couldn’t catch the front guys. My legs were hurting over the first k or so but then came right and at the end I didn’t have my normal last gear but that will come with more training. It is good to have a hit out before the World Champs qualifiers in Gisborne in two weeks, that is where I am aiming to book a spot on the team in that race.”