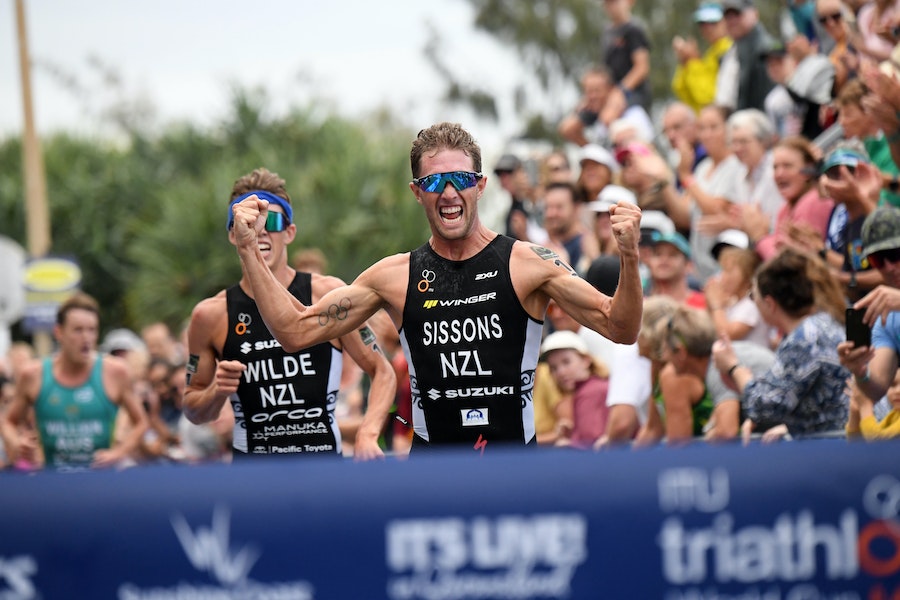 The 2020 season started in Mooloolaba, Australia, with the Mooloolaba ITU Triathlon World Cup.

Located on the famous Sunshine Coast, Mooloolaba hosted a world class field of elite men including Olympians, Commonwealth Games representatives, experienced and emerging triathletes on the circuit, as it served up the first fix of World Triathlon, specifically World Cup, race action.

The elite men were tightly bunched and closely together in the ocean sprint swim with only a few seconds between the huge group. Slovakian Olympian Richard Varga, Hungary’s Mark Devay and Diego Moya from Chile were the first men to hit the beach and run to the first transition of the day. Australian Commonwealth Games Mixed Relay gold medallist Matthew Hauser and Tayler Reid from New Zealand were next in.

A huge train of nearly 30 elite men rode together across the 20km bike course with athletes from the British triathlon team putting the pressure in front at times.

A quick transition by Australia’s Matthew Hauser saw him motor out of the second transition in Mooloolaba to lead out onto the run followed by New Zealand Olympian Ryan Sissons and Japan’s Kenji Nener.

Willian from Australia and Ben Dijkstra from Great Britain were placed in the mix of the leading men on the run. A strong group of elite men established a noticeable gap on the final portion of the race and this is where the podium was going to come from.

Sissons showed no signs of backing down across the final stage of the run and he had young gun Wilde hot on his heels.

A thrilling sprint saw Sissons storm across the finish line to take the tape and earn the gold medal while Wilde clutched onto silver with an outstanding race performance.

“It is a good feeling. The last two years have been pretty average, I have had some good races and I have had some absolutely terrible ones. The last two races of last year I didn’t even finish. I had really good summer of training with the group in Cambridge high performance centre. I came here determined to win, I wanted to win this race. I have always wanted to win this race, it is a great one to race at.

“I did everything I needed to do and I put myself in the best position on the swim, right in contact, on the bike I was at the front the whole time and I went off on the run as hard as I could and let everyone else chase and it paid off,” said Sissons.

“Running into the finish I had to go early because I knew that if I sprinted the calf wasn’t going to enjoy it. Ryan pipped me at the end but I am stoked to be here,” said Wilde.

Willian from Australia claimed bronze and just as Mooloolaba had witnessed in the women’s race, saw Australia round out the elite podium.

“Mooloolaba was my first World Cup win, so full stop, this race has always had a special bond with me and place in my heart. I have always come up here for holidays since I was a little kid. Ever since I was 13 or 14 I have watched the elites race around here and to do that now as an elite. It is one of the greatest races and I really love it,” said Willian.

In the light of the rapid spread worldwide of COVD-19, the Executive Board of the International Triathlon Union has decided to suspend all activities until the 30th April. The measure includes the suspension of all the competitions in the World Triathlon calendar, courses, camps and other activities, and therefore all the World Ranking, Olympic Qualification Ranking, Paratriathlon Ranking and Paralympic Qualification Rankings will be immediately frozen, from Monday 16th of March 2020.