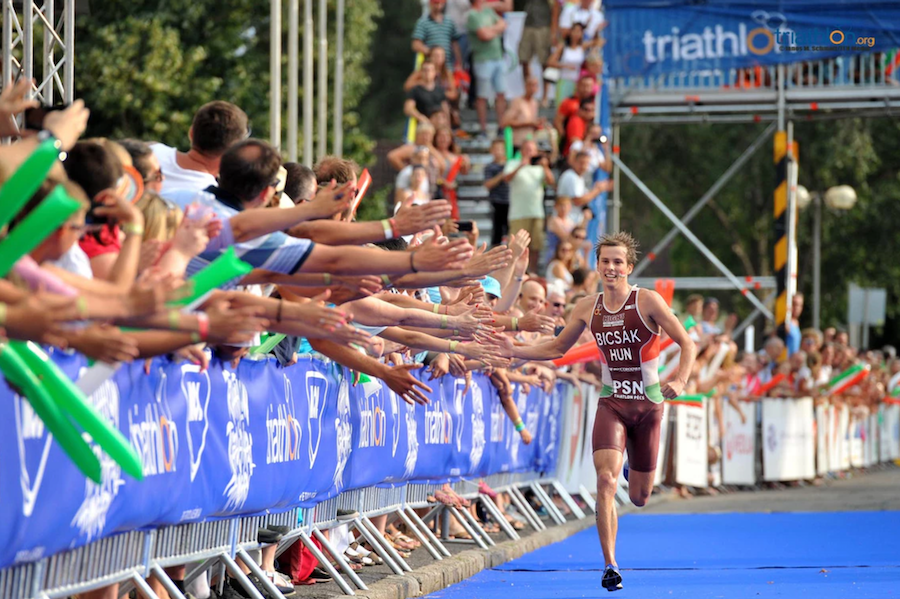 The ninth stop on the 2018 ITU World Cup circuit marks the return of the home of Hungarian triathlon, Tiszaujvaros, for two days of racing that bring with them the added excitement of the semi-final and final format. Having celebrated its 20th anniversary in 2016, the ‘Tiszy’ World Cup has cemented its place in the heart of the triathlon calendar, wrapping itself in a week-long festival of sport and culture.

Large fields for both the men’s and women’s sprint-distance races will see more than 30 nationalities represented on the start lines, before the numbers are then boiled down to the top 30 athletes for Sunday’s two finals. Once again the course will be fast and flat, with the intimate layout giving plenty of opportunity for the crowds to get behind the athletes as they look to head into the second half of the year on the back of a confidence-boosting performance.

Women’s race preview
After a strong WTS Leeds display saw her leading through T2 before eventually finishing in 12th, Britain’s Sophie Coldwell will be eager to build on that performance with a World Cup podium place in Hungary. The GB team also sees Lucy Hall and India Lee gunning for gold and all three should be well placed out of the water to make a push for the podium.

The USA’s explosive young talent Taylor Knibb should be well suited to the sprint-distance format, while teammate Chelsea Burns would certainly love to land her first top-three finish since Huelva last year.   Australia’s Emma Jeffcoat should never be ruled out of a list of gold-medal contenders, and was victorious in Chengdu back in May, the only other World Cup event to adopt the semi-final / final format.

Third in Cape Town in February, Hungary’s Zsanett Bragmeyer will be buoyed by the crowds as she goes for a first-ever Tiszy podium place. Even more hungry for that medal will be teammate Zsofia Kovacs who twice felt the disappointment of missing out by just one place, in 2014 and 2015.

Austria’s Lisa Perterer enjoyed a successful June with a win in Cagliari followed by fourth place in Huatulco, and will be eyeing up another medal in Tiszy, while compatriot Julia Hauser is due another big performance having struggled for form since coming third in Sarasota nine months ago. Japan’s Juri Ide emerged as the winner from that race in Florida but, following a series of consistent if unspectacular showings, she will need to produce her very best to be a contender in Tiszy this time around.

The top nine athletes from each semi-final, plus the three next-best times, will make it to Sunday’s final. The full women’s starting line-up can be found here.

Men’s race preview
The Hungarian men will be looking to qualify a decent contingent for the final, with Bence Bicsak looking in excellent form so far this year and Gabor Faldum due for a good result and highly capable if he can deliver a good swim that keeps him well in the hunt early on.

Fourth here last year, Canada’s Matthew Sharpe has been the nearly man so far again in 2018, unable to convert from some promising positions in WTS, the Commonwealth Games and most recently a fifth-place finish in Antwerp.

Tiszy will also be a hugely important race for USA’s Kevin McDowell, who has endured a forgettable start to 2018 and be looking for better things in the second half of the year to turn his season around. Fellow American Tony Smoragiewicz could also find himself pushing once more for a first World Cup podium place after a solid top-ten finish in Astana.

France’s Aurelien Raphael has enjoyed an excellent six months with a win in Tongyeong at the end of 2017 and third in Astana in May, and he should once again find himself at home over the sprint distance. That Astana course also brought the best out of Russia’s Dmitry Polyanskiy as he powered to gold in Kazakhstan, and he and brother Igor will be ones to watch once more in Hungary.

Former Italian national champion Davide Uccellari is no stranger to this Tiszy course and his current form could see him make a play for the podium, while Mexico’s Rodrigo Gonzalez arrives fresh from his success in Huatulco and ready to make an impact on another big 2018 World Cup occasion.

The top nine athletes from each semi-final, plus the three next-best times, will make it to Sunday’s final. The full men’s starting line-up can be found here.

Both finals will take place on Sunday with the Women’s Elite at 15.45 and the Men’s at 17.10. You can follow the races on @triathlonlive with the hashtag #TiszyWC and via Triathlon.org/live as well as on the official ITU Facebook page.